The Entire Life Story of Ivan the Terrible: A Ruthless Leader The History Hour,Jason Zenobia,Dimiter Mutafchi 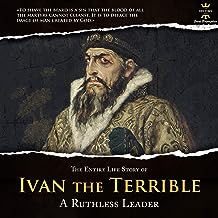 The History Hour,Jason Zenobia,Dimiter Mutafchi The Entire Life Story of Ivan the Terrible: A Ruthless Leader

Has Ivan Chetvyorty been a wicked and ruthless leader? Has his nation suffered as he pursued his own corrupted agendas? Surely, though, none comes close to the violent, lascivious, vengeful reign of Ivan Chetvyorty Vasilyevich, born to the Rurik Dynasty in the Grand Duchy of Muscovy.  Indeed, this man’s period in power was one of the longest in Russian history, lasting more than half a century. If the early years of his rule saw him as just a child, powerless to stop the corruption of his supposed mentors, he more than made up for it when coming of age. And Russia suffered as a result. Inside, you’ll find chapters on: Birth of a Tyrant A Menagerie of Marriages A Tyrant’s Agony The Sacking of Novgorod and Other Campaigns Death And much more! He was also the first tsar of this great country. A title he endowed upon himself which, as we shall later see, carried much greater significance to the Russian people than those four small letters might suggest.  This was a man whose reign went unrecorded - the fear of putting in writing anything he said or did is far too great to entertain. Thus, his history is told through stories passed down through generations and legends which have entered folklore.  If his history is, therefore, subject to the variations wrought by time, and the passions and fear he generated, one fact does stand tall and true. That is that we know this tyrant by a more memorable name. Ivan the Terrible - perhaps, the most understated title in the history of mankind. Do not hesitate. Buy the audiobook now.