Frozen in Time: Murder at the Bottom of the World

Theodore Jerome Cohen,Gregory Pond,Wordwooze Publishing Sep 18, 2021 Theodore Jerome Cohen,Gregory Pond,Wordwooze Publishing
The trail from a major theft at the Banco Central de Chile in Talcahuano following the Great Chilean Earthquake of May 22, 1960 leads to Base Bernardo OHiggins, a wind- and snow-swept Chilean Army outpost on the North Antarctic Peninsula. When Chilean Army 1SGT Leonardo Rodrguez fails to return from a seal hunt in the waters around the base, two Chilean Navy non-commissioned officers, CWO Raul Lucero and CPO Eduardo Bellolio, become LCDR Cristian Barbudos' prime theft and murder suspects. Fearing he will die, Barbudo reveals the identity of his two suspects to visiting scientist Ted Stone, thereby placing Stones life in jeopardy. But who can Stone trust with this information, if it comes to that, to see justice done?  This story is a work of fiction based on real events that took place between 1958 and 1965. It is a tale of greed, betrayal, and murder - one in which the listener is given a window into the frozen world at the bottom of the Earth that few people ever will hear about, much less experience. Among other things, it explores why, though seemingly unfair, bad things happen to good people; how the battle between good and evil can change forever even the most innocent person; and most of all, the role deception plays in nature, man, and life. 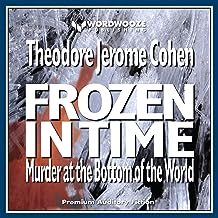 Book Title: Frozen in Time: Murder at the Bottom of the World