Ancient Mesopotamia: Life in the Cradle of Civilization

The Great Courses,Professor Amanda H. Podany PhD Sep 25, 2021 The Great Courses,Professor Amanda H. Podany PhD
When we imagine what life might have been like thousands of years in the past, the images we often conjure are primitive ones: reed and mud huts or plain brick dwellings, cooking pits, villagers, and simple farms. That was indeed what life was like in the earliest settlements, but by 5,000 years ago, life in some places had become much more sophisticated than we might think. Impressive achievements - like stepped temples that towered like mountains, elaborate palaces (some with bathrooms and plumbing), and complex houses - were also a part of life for people who lived in cities that arose thousands of years ago, particularly in the fertile region that emerged along the Tigris and Euphrates Rivers. Welcome to Mesopotamia, the ancient name for the region that is now Iraq, a remarkably advanced civilization that flourished for two-thirds of the time that civilization has existed on Earth. Mesopotamians mastered irrigation agriculture; built the first complex urban societies; developed writing, literature, and law; and united vast regions through warfare and diplomacy. While civilizations like Greece and Rome have an unbroken tradition of written histories, the rich history of Mesopotamia has only been recently rediscovered, thanks to the decipherment of Mesopotamia's cuneiform writing less than 200 years ago. In this 24-lecture course taught by Professor Podany, you'll fill in the blanks of your historical understanding as you witness a whole new world opening before your eyes. Riveting stories about kings and priestesses as well as ordinary people from all walks of life transport you back in time, giving you invaluable insights into the history of a landmark region that has long been known as the cradle of civilization. 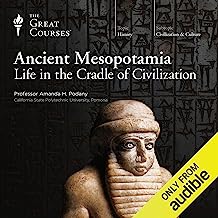 Book Title: Ancient Mesopotamia: Life in the Cradle of Civilization