The R&A Sep 17, 2021 The R&A
Amid great excitement and almost unbearable tension on the Old Course on an unscheduled manic Monday, the 144TH Open featured one of the best-ever finishes in which American Zach Johnson eventually triumphed in a four-hole play-off against 2010 Champion Louis Oosthuizen and Australia' s Marc Leishman. Johnson, the 39-year-old who describes himself as a " normal guy from Cedar Rapids, Iowa" , became the sixth player to win at both Augusta National and St Andrews, while Oosthuizen only just missed out in following both Jack Nicklaus and Tiger Woods in winning back-to-back Opens at the Home of Golf. There was drama aplenty, including Jordan Spieth' s quest for a Grand Slam and notable showings from Australians Jason Day and Adam Scott, England' s Justin Rose and Danny Willett, Paul Lawrie and Marc Warren from Scotland, Spain' s Sergio Garcia, Ireland' s Padraig Harrington and big-hitting American Dustin Johnson. The amateur challenge was particularly strong with Irishman Paul Dunne sharing the 54-hole lead and American Jordan Niebrugge taking the Silver Medal. Produced by The R&A, this book is the official record of the Championship and is the 32nd published in a series that started at St Andrews in 1984. Illustrated with superb photography from the golf specialists of Getty Images, the book contains commentary and analysis from leading golf writers, as well as a full statistical record of the Championship. The Open Annual 2015 is an essential souvenir for all those who witnessed the drama at St Andrews and the millions who watched around the world on television. 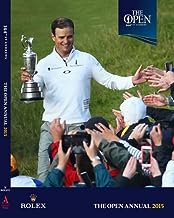