Fight to the Finish: How the Washington Nationals Rallied to Become 2019 World Series Champions (English Edition)

The Washington Post Sep 25, 2021 The Washington Post
The Washington Nationals entered the 2019 season with high hopes but an uncertain identity under second-year manager Dave Martinez. Gone was Bryce Harper. Still around were dominant starting pitchers in Max Scherzer and Stephen Strasburg star third baseman Anthony Rendon talented young outfielders Juan Soto and Victor Robles &ndash; and the specter of past playoff disappointments. A slow start dragged down by bullpen collapses saw the team 12 games below .500 and 10 games out of first place entering Memorial Day weekend. And then began a turnaround for the ages. Behind bedrock pitching from Strasburg and offseason acquisition Patrick Corbin clutching hitting from Howie Kendrick and midseason signing Gerardo Parra the Nationals played the final 112 games of the regular season as well as any team in baseball to capture a wild-card berth. Along the way they discovered the camaraderie and joy that would propel them to a wild-card victory over Milwaukee an upset of the Los Angeles Dodgers in the division round a sweep of the St. Louis Cardinals in the National League Championship Series and finally a World Series victory over the Houston Astros. In Fight to the Finish relive the Nationals' run through the images and words of The Washington Post photographers and reporters who followed the team every step of the way. 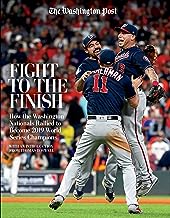