The History of the United States, 2nd Edition

The Great Courses,Allen C. Guelzo,Gary W. Gallagher,Patrick N. Allitt Sep 17, 2021 The Great Courses,Allen C. Guelzo,Gary W. Gallagher,Patrick N. Allitt
This comprehensive series of 84 lectures features three award-winning historians sharing their insights into this nation's past - from the European settlement and the Revolutionary War through the Civil War, 19th-century industrialization, two world wars, and the present day. While American history spans not much more than two centuries, it is filled with a wealth of leaders, wars, movements, inventions, and ideas - each of which contributed in its own unique way to America's transformation from 13 disparate colonies on the east coast of North America into a global superpower. These lectures give you the opportunity to grasp the different aspects of our past that combine to make us distinctly American, and to gain the knowledge so essential to recognizing not only what makes this country such a noteworthy part of world history, but the varying degrees to which it has lived up to its ideals. The lectures chart the five predominant themes that run throughout the chronicle of U.S. history: The American passion for freedom-including religious, political, and economic freedom. The pursuit of education, which has been the quintessential way for Americans to invent (and reinvent) themselves. The unquestioned faith in the value of popular government. The willingness of Americans to experiment with and adapt to new environments and situations. The belief that the United States is a "city on the hill," a country the likes of which the world has never seen before. Placing familiar historical events in the context of these overarching themes will help you see American history less as a series of separate events and more as a mosaic in which everything is interconnected. 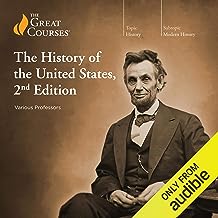 Book Title: The History of the United States, 2nd Edition