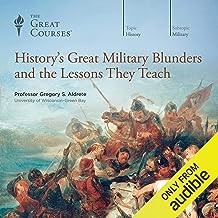 Military history often highlights successes and suggests a sense of inevitability about victory, but there is so much that can be gleaned from considering failures. Study these crucibles of history to gain a better understanding of why a civilization took - or didn't take - a particular path. Full of dramatic reversals of fortune and colorful characters, this course examines some of the world's most notable examples of military misfortune, from the humiliating destruction of a Roman army at Carrhae in 53 BC to the tragic landings at Gallipoli in World War I. Success and failure, as you'll learn, are two sides of the same coin. These 24 lectures reveal how the trajectory of history hangs in the balance of individual battles; even a single person's actions in a particular moment have made drastic and irreversible impacts. From ancient Greece through global war during the first half of the 20th century, you'll delve into infamous conflicts such as the Charge of the Light Brigade and the Battle of Little Bighorn as well as lesser-known battles. How could an army equipped with cannon be wiped out by Zulu warriors wielding spears and outdated firearms? How could armored French knights be vulnerable to the crude weapons of a band of Flemish shopkeepers? Why would a savvy Chinese general fall victim to a tactic he had previously used himself? Unpredictable twists of fate abound, demonstrating that when it comes to war, there are no givens. Sheer numbers, superior weaponry, and skilled leadership are never a guarantee of success. Take a fascinating journey through some of the most gloriously inglorious wartime encounters. Along the way, you'll get to know some of the most legendary characters in world history. PLEASE NOTE: When you purchase this title, the accompanying PDF will be available in your Audible Library along with the audio.