The Editors of TIME Sep 22, 2021 The Editors of TIME
The stories, the people and the photos that made 2017 unforgettable2017 was packed with drama and tragedy, inspiration and awe. Now TIME reviews the highs and lows of the year, with unforgettable photographs and thought-provoking stories from the events, people and places that shaped our nation and our world. An unconventional president took office, and every day seemed to bring a new controversy, from "policy by Twitter" to Team Trump's internal doings and much more. There were tragedies-mass shootings in Texas and Las Vegas, and nature's fury unleashed in wildfires that ravaged Northern California and hurricanes that decimated the Caribbean and the Gulf Coast. There were triumphs and joy as well-the Houston Astros won their first World Series in emotional style, and the nation gathered to witness the first total solar eclipse in decades. Undoubtedly, it was the year of the woman, with the historic Women's March in Washington, the #metoo movement and the ascendance of a new superhero: Gal Gadot's historic star turn as Wonder Woman. We also profile the people who helped shape the news, including John Kelly, Steve Bannon, Travis Kalanick, Sloane Stephens and more. The year in arts and sports are covered, with the best from screen, stage and the page. Plus: a section chronicling notable lives we lost in 2017, including Tom Petty, David Rockefeller, Mary Tyler Moore, Jimmy Breslin, Hugh Hefner and more. It was a memorable year, and The Year in Review captures it all. 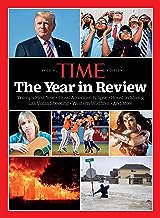 Book Author: The Editors of TIME