Theresa Bane Sep 20, 2021 Theresa Bane
The heavens and hells of the world's religions and the "far, far away" legends cannot be seen or visited, but they remain an integral part of culture and history. This encyclopedia catalogs more than 800 imaginary and mythological lands from all over the world, including fairy realms, settings from Arthurian lore, and kingdoms found in fairy tales and political and philosophical works, including Sir Thomas More's Utopia and Plato's Atlantis. From al A'raf, the limbo of Islam, to Zulal, one of the many streams that run through Paradise, entries give the literary origin of each site, explain its cultural context, and describe its topical features, listing variations on names when applicable. Cross-referenced for ease of use, this compendium will prove useful to scholars, researchers or anyone wishing to tour the unseen landscapes of myth and legend. 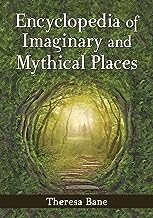